A couple of weeks ago I managed to obtain enough castings of BN/40 Dragoon (mounted) trotting in helmet with flowing horses tail plume to expand my existing squadron of six figures to a full twelve figure unit. I’m pleased about this because the figure is one of my favourites, being in a unique pose amongst the other figures in the Horse Attached Series. My suspicion is that this was the first cavalry figure that Marcus Hinton sculpted for the Napoleonic range as the pose seems designed for ease of casting and is similar to the mounted figures in the earlier American Civil War range. 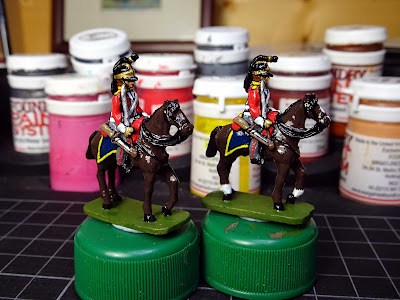 The recent acquisitions are all excellent castings with no flash unlike the six figures I had already that were basically a solid block of metal from which I had to hew a model soldier. I love the fact that the previous owners had given up on the attempt and just painted over the flash.

Work is underway and this move also heralds a long overdue reorganisation of my entire British Heavy Cavalry.

They're nice, the horses heads are little finer than the more normal HH horses. I am looking forward to seeing a whole regiment of these hacking their way through Johnnie Crapeaud.

One of the prettiest cavalry uniforms around. These look fantastic.

Sacré Rouge! That's a very fine pair of troopers you have there Ian!

Very nice indeed Ian, one of my favourite British Napoleonics. I still wonder why MH did not replace the production moulds from the masters as they began to wear? You must have hacked your way through a lot of excess metal over the years! Looking forward to seeing the completed unit.

The Cavalry are looking very nice - great work there IAN.

And even worse one of the previous owners had started painting them as French Dragoons.

The full unit will look fantastic. But what about your Horse Guards. Who will be brigaded with them now?

Rob, despite the lack of animation they do look suitably intimidating when ranked up.

Thanks Stokes and a bit easier on the eye to paint than Austrian white.

Thanks WM this should give the French something to worry about in the next game!

Lee, you're right I have filed a fair few figures over the years. As to the condition of the moulds, RB told me that the HH production process was pretty shambolic as MH's main interest was in making the figures and not so much in manufacturing them.

Thanks Kev, you can't beat a red uniform.

Mark, yes he had (now who could that have been?). I have a few more troopers to make up the Blues to a full unit but I have to reassemble those Greys first!

Rock on!!
These look great Ian. The lines on the saddle cloths are so perfectly straight!
Regards, James

Can’t have enough dragoons and especially not Inniskillens. You have restored these guys to splendour, Ian. Good one.

Thanks James but to be fair this is one occasion when the mould lines on the castings were very clear.

Nigel, yes and I think between you, Goya and myself we now have a Division of them!

I remember that the first ever Hintons I had had ‘lumps’ on the bases... at the time I assume they were rocks sculpted on to add realism...
Of course much much later I realised what had really caused them...

Hi Aly, I remember receiving my first Hinton Hunt order through the post and being very disappointed that I had to sculpt the figures myself from nuggets of metal. Luckily my dad came to the rescue and lent me his set of files - happy days!