Back to the… drawing board! 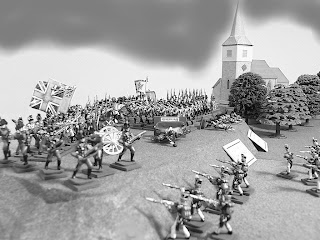 We finished the rule play-test game this week and the good news is that the Duke of Wellington finally broke his run of bad luck and won a battle. The bad news is that I finished the game pretty disappointed with the latest version of my rules Muskets & Marshals.

I realised that I had fallen into the trap of over complicating things, which was contrary to my original aim of a simple enjoyable game. For me wargaming is about having a bit of fun (and hopefully winning of course) but during much of this game I had the same sinking feeling I used to get in maths exams.

After some head scratching and some fairly drastic cutting, I have reduced the playing rules down to just three sheets of A4 paper with another two or three sheets of other rules and definitions. I’m going to do some more solo play testing but I think I might finally have cracked it.

For the battle report click here.
Posted by Stryker at 20:58
Labels: Playing Soldiers

Its tricky, if a set of rules is too thin it leaves all sorts of embarrassing holes. If it is too thick then it is complicated, hard to remember and difficult to play because you need to know how things work to use appropriate tactics.

The issues to get really right in Napoleonics are
Do squares repel cavalry? Does shooting from good line troops who have not been disordered.just stop a column attack. Do columns beat lines IF they hit them? Is charging guns nearly suicidal? Do supported infantry get in to fight?

I played a game with a friend who had the Spanish, I had poor grade french. However, as I attacked him on a hill, I beat his units, but they fell back uphill so every move he got an advantage. A seemingly useful rule that uphill gave a benefit when fighting meant that the guys on the hill were unbeatable because these rules had another mechanism that created stragglers. The pushed back units were regaining their stragglers, my advancing units were losing them.
That's where complexity was unfortunately necessary so pushed back units could not regain stragglers and melee winners should have lost none. Nice mechanism, but having the rules too simple made a nonsense.

It is all a question of fine balances and commercial sets often do not get it right.

So don't be too hard on yourself.

Roy - it's because of some odd melee outcomes in our game last year that I decided to re-hash the melee rules but my new system was too cumbersome. I've gone back to the original concept but fiddled around with the factors to try and achieve the end results you mention. A square should nearly always stand against cavalry but there should be a small chance it will break, British infantry should usually see off a French column but there must be chance they succeed, oh, and of course Russians should always lose!

Ahh the Russians and those still awaited drummers.
The problem with Russians and Austrians is this: they both form their infantry (from about 1809) into company columns and thus have considerable depth. this enables them to resist cavalry frontally, as if they were squares. Lines are too thin to do do this (unless you are really well drilled pros and can shoot down cavalry charges.)
However, these columns can and do shoot. I think that that is unlike advancing columns where these should not shoot. The problems with advancing columns shooting is that Johnny Frenchman picks on one end of a British line and has as many men shooting as the Brits and has more units so casualties per unit are less and that means the lines lose out in the firefight and then the Attacking columns squish the opposing line. Meanwhile the test of the redcoats have stood in long lines facing nothing!!

In effect a long line of these Austro Russian mini columns will act like a long line to its front when stationary , but the rear three or more ranks do not shoot.

How do you cope with this in your rules??

Roy - Columns fire at half-effect which balances the British line/French column problem. I hadn't thought about the stationary column thing and you make a good point. I want to avoid over complication but we could allow defending columns to fire at full effect where they haven't moved for say two or more turns?

I wonder whether advancing columns should fire at all. If they are advancing to the charge then stopping to shoot is not on, the officers would never get them going again. That is why Frederick the Great had his men advance with muskets shouldered so that they could not stop and shoot without an order.
Of course, in the Peninsula columns could not fire because the Brits were behind the crest and/or their own skirmishers were to the front which is how it should be. A column stopping to shoot would surely attempt to deploy into line, the proper formation for shooting. Of course another reason that column attacks do not mass is that they generally need to be able to deploy to right and left to go into line for shooting while some stayedin column for assault (order mixte0.
I suppose a halted column can fire at half effect?
I like the idea that halted columns for Austrians and Russians can shoot if thy have been stationary for two turns. That sort of fits with the Ivans ponderous advance then stand and take it tactics.
Roy