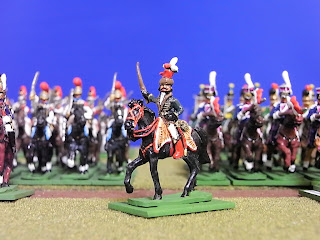 Joachim Murat was made a Marshal of France in 1804, by which time he had already seen much hard fighting as commander of the cavalry during Napoleon’s early campaigns. He went on to become “Prince Murat” then “Grand Duke of Berg and Cleve” and finally “King of Naples”, although this impressive string of titles may have had something to do with the fact he had married Napoleon’s ambitious youngest sister. He commanded the cavalry at Jena and Eylau and was present in Madrid at the start of the Peninsula War. He also played an important part in the 1812 and 1813 campaigns.

Murat was something of a snappy dresser and his taste for outlandish uniforms was probably only equalled by that of his chum Prince Poniatowski. Once when he turned up in a brand new outfit the Emperor told him to go away and put on his uniform as he looked liked “Franconi the circus-rider”. He wasn’t all that popular with the other marshals either and quarrelled in turn with Ney, Lannes and Davout. Lannes described him as “a scoundrel in a pantomime dress with plumes like a dancing dog” – so no love lost there then. 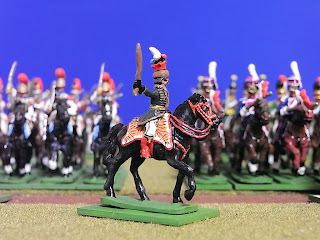 He was a brilliant cavalry commander with a superb eye for ground and was undoubtedly very brave. However, he had less understanding of the proper employment of infantry and that led in part to the friction with other commanders. On one occasion Davout refused to allow his artillery to fire in support of Murat when the prince got himself in a sticky situation at the head of a regiment of lancers. On another he was forced to seek shelter in a square of the 105th ligne after his cavalry were routed. Taking refuge in the same square was Marshal Soult who remarked dryly “What about the merits of cavalry and infantry now, old boy?”

During the Hundred Days Murat was preoccupied with trying to save his throne from the Austrians (imagine if he had led the cavalry at Waterloo!) but was defeated, captured and then shot by firing squad in October 1815. His last words were reputedly “Soldiers! Do your duty! Straight to the heart but spare the face. Fire!” 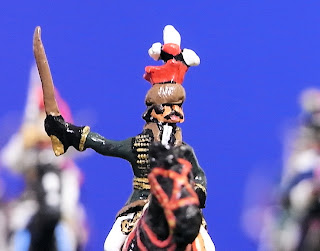 I stuck faithfully to the Hinton Hunt painting instructions for this one (except that I edged the shabraque in red) and Marcus Hinton notes that Murat wore this particular uniform during the invasion of Russia. The previous owner of the figure had painted his horsewhip as a sword, an easy mistake to make given the vagaries of 1970s casting. The figure is listed in the Hinton Hunt catalogue as FN/351 PRINCE MURAT, in plumed “lancer” cap and fur trimmed braided coat (horse FNH/11). My thanks to Clive for making this and many other original Hinton Hunt Painting instruction sheets available on his blog – for Murat click here.
Posted by Stryker at 15:11
Labels: French, General Staff

He is outlandishly good!

Dig those groovy threads man! Those HH personality figures really are very nice - and you can never have too many. Whose next?

Hi DC - I use the personality figures as colonels for my units so I paint one up each time I finish a unit. It means they actually get used on the table. My next unit will be French and I'm thinking possibly Massena...

Ian's officer system is a bit limiting for the Russians,
Prussians an Austrians, though. I am hoping that his gallery of military talents will fall out amongst themselves when we fight again.

Roy, I'm sure you could easily paint up some of the HH French personality figures as Russians. I did actually think that there should be a "bickering" rule if a unit commanded by Lannes is asked to support one by Murat!

I don't think that the Russians have the delightful uniform variations that Napoleon's 'Brilliant Staff' display.
Mostly flat caps and riding coats I think.
Roy