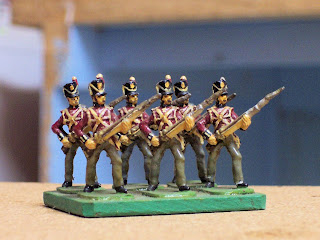 Well that’s the burning question once again around these parts thanks largely to an email I received today from Paul (from down under). It turns out that Paul has some Hinton Hunt British based in exactly the same way as Mike’s WHC ones. He kindly sent me this picture of some of his own BN5’s.

Paul said his figures have been based using a material called Masonite, which is a new one to me and sounds suspiciously like something that Superman may be allergic to. A quick check on Wikipedia confirms that it is a type of fibreboard, which among other things is used to make the best wobble boards!

The problem is that I am really taken with the idea of re-basing in this style because it is in keeping with the original aim of this project and I have always admired those old pictures of Peter Gilder’s troops. It would also solve a practical problem that I am starting to have namely that it would stop the troops from falling over and make moving them less fraught with the danger of breakages. My current system is fine for the display cabinet but for playing a wargame it’s really not so clever.

Of course if I go ahead with the idea it will be a massive distraction from painting up new stuff so please let me know what you think by taking part in the poll (top left column of blog). As always please feel free to leave a comment as well. For those of you not familiar with my current basing system take a look here.

Due to some sort of Google error I had to close the polls early (no riots please!) but here are the official results: 11 of you voted with 8 saying I should rebase and 3 saying I shouldn't. It seems like a clear cut victory for the rebasing party but we shall see.
Posted by Stryker at 20:01
Labels: British, Guest Appearance, Waffle

Having such big bases looks kinda weird to me. Its as though they are moving around on a small island. Your current system is the truly retro one if you look at the pictures on the Hinton Hunter of games way back when. The thicker basing would have been unusual at the time
Roy

It looks as though the vote is in favour of 'Yes - get on with it'. I can only assume that you have been voting on your own blog, because no-one in their right mind would want to re-base yet again when there are so many figures to be painted.

Hi
I am against re-basing! Use your scaerce and precious time in painting...
Rafa

I suspect the fact that as you have now mentioned re-basing in the last two posts your mind is made up!

They are your toys and I can see the attraction of the "Gilder Style" bases!

I like your figures based the way they are Ian, and the label beneath the base is a nice touch for a vintage collection. I have never been keen on those big bare chunky bases myself and Peter Gilder himself soon changed to 'textured' bases.But I understand what you say about potential damage to figures falling over, so I guess you are right to re base in that style.

Certainly as a member of SELWG back in the early/mid seventies I never saw chunky multi bases at all, two's and threes being the norm there at that time.