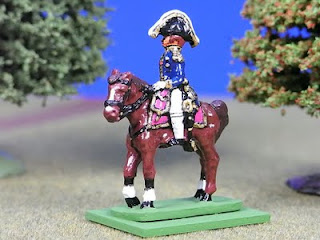 Jean Lannes was a talented soldier who rose from the ranks to become one of Napoleon’s original eighteen marshals of France. During the campaign in Italy he personally intervened to save Bonaparte’s bacon at the bridge of Arcola and thereby earned the eternal affection of the Emperor. Some of the other marshals weren’t quite so keen on him however - notably Murat with whom he had a long running feud.

Lannes was always in the thick of things and commanded the left of the Grand Armee at Austerlitz and further distinguished himself at Jena and Friedland. The Emperor took him along to Spain in 1808 where he won a rare French victory at Tudela. At Ratisbon in 1809, when his men were looking shaky, Lannes seized a ladder and ran forward shouting “I was a grenadier before I was a marshal!” then attempted to scale the walls himself. On the second day of Aspern-Essling he was mortally wounded by a shot from a 3-pounder cannon and carried from the field. The Emperor later said of him “that he had found a pygmy and lost a giant.”

Marcus Hinton never included a figure of Lannes in the personality figure series but Roy suggested that he probabaly chose the subjects in order to represent as many different uniforms as possible rather than for reasons of popularity. So I decided to use my vintage casting of FN224 French General in cocked hat (one-piece casting) to represent marshal Lannes and here he is – in pygmy version.
Posted by Stryker at 14:33
Labels: French, General Staff

Aspern where the heroic Lannes was fatally wounded is well wort a visit. If you go to Vienna, itself having a brilliant army museum, then Aspern is just across the Danube river. It still has some of the original buildings from the battle. The field itself is a very flat plain and the ridge that dominates the battle of Wagram , the second battle on the site in 1809 is surprisingly low, yet dominant as the plain before it is so featureless.

Nice paint job. After Davout Lannes was possibly the best of Napoleon's marshals and a great motivator. He should give a +1 to any troops he seeks to rally.
Roy

And very pretty he is too, in a martial sort of way (of course)! I just love these vintage figures you work with.

For those interested, the best recent work on Lannes is The Emperor's Friend - Marshal Jean Lannes by Margaret Scott Chrisawn, Greenwood Press 2001. Great read and an excellent addition to anyone's Napoleonic library.

A very nice finish Stryker. I have a little 15mm lannes I plan to base up in the future.
Regards
Paul

Hi
Lannes is remembered here in Spain for the second siege of Saragosse. He's not a too loved man!
Regards
Rafa

The French invasion of Spain in 1808 (?) has many parallels with Afghanistan today.
The French thought that they were helping the Spanish by removing another corrupt Bourbon and bringing good laws and efficient administration to Spain. Actually the Spanish king could have retained nominal power. However, the Spanish people hated their liberatoors and fought a bloody war of heroism atrocity to throw the French out and return to their corrupt and maladministered independence, dominated by priests and aristocrats. Isn't it strange that people hate an enlightened invader more than they dislike a terrible and corrupt government. The pictures of Saragossa show how the citizens fought alongside the very monks who were living like parasites off them. No wonder Napoleon was astounded.. How irrational and romantic the Spanish and Afghans are.

Hi Lewis
Maybe you had some reason in your point, but the French did not invaded Spain primarily to help the Spaniards to remove a corrupt regime (so corrupt like Russian, Prussian or Austrian monarchies). They came here in road to Portugal, to fight the British Continental System.
The Spanish people was indifferent to Napoleon in the same way then the rest of European peoples
Regards
Rafa

Not sure I agree with you there Rafa old chum.
What was Napoleon's problem with Portugal? Yes it was trading with Britain, but the effect upon Napoleon's power was minimal. The Spanish had been French allies at Trafalgar and had no love for the British. So if he wanted to get at Portugal then just march across Spain with permission, buying goods on the way.
No amigo, Napoleon was a true Fascist and son of the French revolution and wanted to bring order and reason to Spain. He invaded it to 'liberate' it and possibly to give his brother a throne. The British arrive in Portugal only after the French invade Spain.
Forze Abrazzo
Roy

Rafa, Chronology is here.
http://www.historyofwar.org/articles/wars_peninsular.html
Spain was always going to be on Napoleon's list of targets because, as he once said, his power reied on constant war. Without war the French people would not need him.
Affectionately
Roy

Hi Roy
I agree with you: Napoleon needed war to maintain his throne. You are right pointing that no Biritish were in Portugal in 1807. However, the main reason of the Iberian invasion was to subdue Portugal into the Continental System, i.e. at last to fight against Great Britain.
Cordially
Rafa