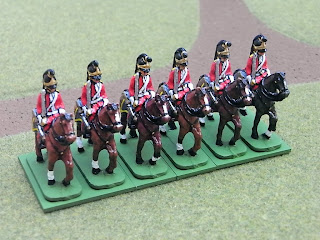 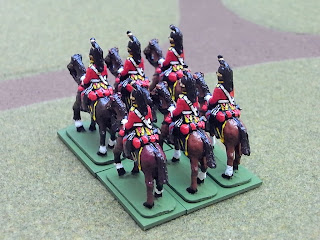 Thanks to the arrival of some recruits sent by Clive I have been able to make up my small troop of British Dragoons to a full six figure Squadron. If you remember (and why wouldn’t you?) I originally had only three of BN40 British Dragoon Trotting in Helmet so the extra figures have been a boost to the British Heavy Cavalry contingent. I have said before that these Hinton Hunt one-piece castings are a bit of an acquired taste being of variable quality and detail. This particular figure is one of the oldest offerings from Marcus Hinton with less animation than his latter work but perhaps this is part of the reason that I like it so much. These castings suffered badly from HH flash metal syndrome and each one took me half-an-hour with an array of files to transform from an almost solid block of metal into the fine looking troopers you see here. It’s no wonder that the original owner of some of these figures had just painted over the flash rather than remove it – he probably had something better to do with his time than I do. This latest addition to the British Cavalry now leaves my three Household Cavalry Troopers out on a limb as they had been amalgamated with the Inniskilling’s into a single combined squadron. Fortunately I have also received a couple more spare figures that will enable me to increase the Blues to a full Squadron as well.
Posted by Stryker at 19:29
Labels: British, Heavy Cavalry

Very smart indeed and not a single mould line in sight!

I remember these figures. They were the original type of HH figures and very static. I think Marcus Hinton envisaged wargames as being with standing at ease or at attention figures. Only later did he move to animation. These dragoons are quite nice if from an early casting, but were run far too long and the mould hardened and bits of rubber broke off. You couldn't call it a mould line, its a wedge of metal and you had to carve a new figure!
Roy

Your hard work has been rewarded with a nice little unit. I certainly feel your pain re. cleaning up figures - i seem to spend longer doing that than actually painting (let alone wargaming). The move to ultra-hard alloy by many vintage ranges (such as Hinchliffe lately and Suren) just compounds the problem. Oh well, keep filing away.....Cheers.