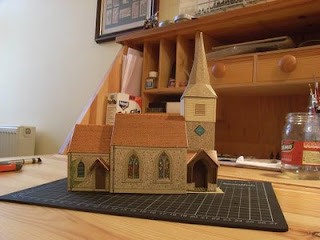 A few weeks ago I stumbled upon a new local model shop and anxious to support such a brave enterprise I ventured in. Amongst the display was a stand of Superquick cardboard building models. I had imagined that this range was long since defunct and was excited to find that the church model (ref B29) was still in production. This was exactly the same model I had last constructed in 1970 for my old Hinton Hunt army to fight around (sacrilegious lot). It was obviously just what I needed.

Then a couple of evenings ago I thought I would assemble the thing as a bit of light relief from painting. I figured that with my finely developed adult model making skills it would only take an hour tops, leaving me plenty of time to settle down with a glass of malt to watch another re-run of Waking the Dead on UK Drama. Alas it was not to be.

Five minutes in and the vestry window was covered in glue, how did that happen? Then the belfry went wonky, this was not turning out as I had hoped. Perhaps my teenage skills were better than I remembered. Next I super-glued my index finger to my thumb whilst accidentally fixing tab A to tab C instead of tab B. How retro was that – I was actually making a worse job of it than I did aged 14. Eventually (two days later) after a total of three and half hours hobby time, the model was complete. I won’t be making another in a hurry.

My original model disappeared many years ago but can still be glimpsed here.
Posted by Stryker at 17:20
Labels: Scenery

Hi Ian, Nice to see that old church once again, I too had one back in my younger days...seem to remember I traded it ready-built from a fellow gamer, so obviously saved myself the apparent hassle of constructing it. I remember the range also had a half-timbered shop that with a bit of fiddling could be made into a usable house...Regards, Iain.

How very wise of you to obtain yours already constructed. There are some other useful buildings in the range but the terraced Elizabethan house I also had does not appear in their list. I will count my blessings on that one. Good to hear from you,

Hey, I like your church! You'd never know that you had glued part of your fingers to it during construction. Kidding aside, its a good looking model. Great work!

Stokes - you can't actually see it in this shot but there is spot on the steeple where I ripped the paper surface trying to remove my stuck finger. I then had to hold the thing under the photocopier to get some brick effect paper for a repair. I think model making was safer in the days before superglue but then of course nothing would stick at all!

..nice looking model though - and remarkably un - "card like" if you know what I mean?