In his book Napoleon’s Campaigns in Miniature, Bruce Quarrie proposes that Sir John Moore was the only other commander in the British Army of the same ability level as Wellington. If this is true, then it could lead to some interesting alternative history scenarios if we assume Moore had survived Corunna. Moore at Talavera? Moore at Waterloo? 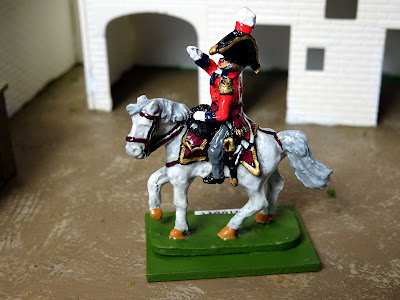 Moore’s career saw him serve as a Lieutenant of infantry during the American Rebellion and later as a Colonel in both the Mediterranean and the West Indies. He commanded the 52nd Foot in the campaign in Egypt and returned home to oversee the defence of the south coast of England against the threat of French invasion. He commanded the British forces in Spain from 1808 until his death a year later at Corunna.
The figure is a vintage casting of BN107 British General (last seen here on this blog) I painted him in accordance with the Hinton Hunt painting instruction sheet except that I gave him grey overalls rather than white trousers, as shown in Blandford’s Uniforms of the Peninsular War.
Posted by Stryker at 12:23
Labels: British, General Staff

A nice figure but as yet un-named (there's' no name tag on the base) are you asking for votes for John Moore? He certainly was a reformer but his career is too limited to judge and dying at the moment of victory(?) always leads to favourable comments, after all he's not going to promoted over you at this point. I would go with a Hill or a Graham unless you already have those?

Rob, the name tag is there on the other side of the base - this is definitely Moore!

Thanks Tony, I've had this figure for years and have always had in the back of my mind he would be Moore!

Beeeeyoootiful, Ian! I think you've done an excellent job on what is quite a challenging figure.

This is the second BN107 I've seen on a blog in recent months. I'm forced to conclude that they really aren't all that well endowed in the nose department. I thought it was just my Clayton version which was like this. Still, one mustn't sniff.

I need to get my eyes checked.

Lovely figure, I like the contrast between the two red shades.

Matthew, there was a lot of flash around the face and top of the arm which the previous owner had just painted over. Once it was removed he didn't have much nose left!

Lee, I was surprised that the painting instructions gave the saddle cloth as crimson as I thought they were normally blue, but Marcus Hinton was an expert on such things!

A top version of the great Sir John, Ian.
Far better than Wellesley in my book; more creative, bold and aggressive—a completely un-testable statement though, of course!

James, well I could try to test it on the tabletop!

Roy, that would have been useful - particularly a Scots Colonel!

Thanks Matt, he does look quite splendid perhaps the Duke will have better luck with him at his side!

He is beautifully presented. I take it you did mean on the same side of the table as Wellesley........"creative, bold and aggressive" indeed, but where would he have been without Black Bob to mind his back?

Thanks Nigel, Black Bob - I'll have to see if I have a spare casting to represent him!

My Lt-Col Henry Cadogan uses the same DK version of this casting and I suspect Wellington Man's comment about the nose job comes from mine. The casting seam ran right down the face and Like General Moore, by the time the flash was removed there really was not a lot of nose left!

I have struggled with the color of the saddle cloth and have come to the conclusion, most likely erroneously, that perhaps the preponderance of blue saddle cloths should be used at the regimental level, saving the crimson for the divisional commanders. It certainly is striking!

A beautiful job on Moore and look forward to seeing what you can do with Crauford!