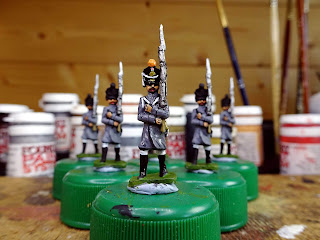 The figures had dark brown coats when I acquired them, but I decided to go with grey on the re-paint. There will also be a company of marching grenadiers (without greatcoats) and the usual command figures to complete this unit.
Posted by Stryker at 13:47
Labels: French

Nice to see some French Line in greatcoats - they definitely are part of my future plans.

Thanks Rob, this is a nice sculpt which makes it easier to paint than some HH also the greatcoat helps!

I'm always in two minds about figures which have been chopped about. Once I've finished my purist internal rant about the philistinism of who ever did it, the devil on my other shoulder points out that this has created a marvellous opportunity! What you've got are fusiliers where there were none before, with the added bonus that you can claim complete innocence of the crime.

I thoroughly approve of the grey greatcoats. It'll make them look very cool and sophisticated against their over-dressed compatriots!

All the best
WM

WM - it wasn't until I stripped them that I realised the epaulets had been removed as well. Up to then I was considering rebuilding the plumes and using them as light infantry but I'm happy with the fusilier look now - less work!

I like the look of the greatcoated figures, they add a certain hardened campaigner image.

Have the sabre briquets been removed too? I looked at doing that, but then realised How hard it would be.I had a smile at Wellington’s purism. HH were always intended to be converted and ‘chopped about’ . I know I am remiss in not removing the elite company plumes from Bavarians and doing paint conversions on figures where a blob of artists acrylic paint can add an epaulette. Honestly, jus as with converting standard bearers and drummers, it was officially approved.

Nice work there IAN- you certainly have a steady hand at completing the HH details. Hope your enjoying your New Shed there and keeping warm too. Cheers. KEV.

I have not yet summed up the courage to chop up an original HH figure. However I have not such compunction when it comes to recast figures.

Matt, yes and add a certain ease to the painting process too!

Roy, the swords are still in place presumably as you say because these are more tricky to remove. I still find it hard to think of chopping up original figures, if they were still in production it wouldn't be so bad!

Mark, I don't like messing around with original figures either but I have no problem with Clayton castings!

They are looking d@mned fine, as your painted figures always do, Ian.
I picked up a copy of Luigi Toiati's 'Toy Soldiers' recently and there, on page 524 in the chapter entitled 'Lilliputians go to war' is a photo of some of your beautiful figures from one of your games (from a few years ago from memory)! It features a brigade of French infantry with voltigeurs to the fore. Superb stuff. You are famous!

James this is news to me - must check it out!

They look very nice Ian...
I am always in two minds about using figures in greatcoats... but I suspect if you get the coat colour right... as you have... they won’t end up looking dull...
And they are quicker to paint... ;-)

Thanks Aly, I've always thought that painting troops in greatcoats is cheating but I wanted to use these ones as in my experience of collecting HH they are pretty rare. This will be the only French unit I have in coats!

Having just sculpted epaulets and plumes on some line figures being converted to grenadiers, I can only say you have saved yourself a tremendous headache! Fortunately most of my unpainted figures are Der Kriegspieler, and I have absolutely no qualms about attacking them with all sorts of knives and clippers!

Well they definitely have the Archduke's seal of approval for what that is worth. It's a shame that HH only put elite figures in greatcoats. They are, after all, the ones you want in numbers. I wouldn't have taken off the sabres either, but would, frankly, be tormented by the double cross belts. I have long been comforted by Roy's words that HHs were meant to be converted. It must be true. Why otherwise the preponderance of elite figures? Easier to remove than to add......There's also a rather cruel truth here. We happy few are the last who are going to find these figures iconic. I reckon Marcus would be happy to know that we soldier on, 34 years after his passage to Valhalla. Why the hell should we not indulge our personal whims in respectfully adapting our treasures to our personal preference. In 20 years, nobody is going to give a whiff of grapeshot.