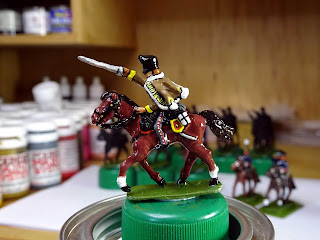 Well it’s hard to believe but I am finally on the last unit of my Prussian army. This will be a 12-figure regiment of the 1st Silesian Hussars painted as per the Hinton Hunt painting instruction sheet.

The figures I’m using are not original ones but are reasonably good copies of unknown origin (they came from the US but are not Clayton). Although I say reasonable copies, to be fair, they are at least as good as the same hussar figures I bought direct from Hinton Hunt in the early 70s which were pretty poor quality.

Receiving a package of HH soldiers back then was always something of a mixed experience, excitement that the toy soldiers had actually arrived within the stipulated 28 day period, coupled with the sinking feeling on seeing how many bayonets/sabres were broken and how much flash metal I was going to have to remove.

Happy days though…
Posted by Stryker at 19:26
Labels: Prussian

So glad they're Silesian Brown Jobs - one of my favourites - I do like the shade of brown you're using, what is it?

Hi Rob, it's Foundry 11A Rawhide which gives a nice mid-brown. Just noticed that the varnish is still wet in the photo!

He looks the business.

Matt, if you mean Prussians its in excessive of 200 now!

He looks great, Ian. The regiment will look fantastic.

Thanks Matthew, he's certainly better than my last attempt in 1972!

The Brown and yellow are a nice combination.

So what is next after you have finished the Prussians ?

Sorry I meant next army!

Mark & Matt, I think next I need a few more French line troops as the force I have is a bit unbalanced.

Many congrats on completing the Prussians. I think this is the first Prussian hussar I have seen in brown; perhaps because others, like me, never saw Marcus' instruction sheet. He looks great. Who is the general admiring him discreetly from the shadows?

Nigel, it had to be brown if Marcus said so! The shifty looking generals will be revealed in my next post.