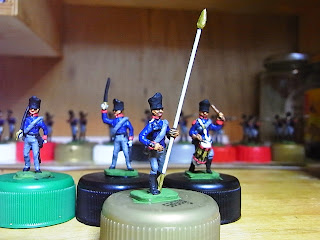 I’m tantalisingly close to finishing the West Prussian fusilier battalion and only have to complete the command figures now and the whole 24-figure unit will be ready for varnishing and basing.

The flag-bearer figure is a conversion of PN.5 Private in an advancing position with separate musket for customer’s assembly. This is a handy figure to have as it lends itself well to conversions, there were similar figures produced for the French and British Hinton Hunt ranges.

I used this same figure pose to make flag-bearers for my old 1970s army but back then I had very limited modelling materials and know how. I used a straightened paper clip for the flagstaff with a hand painted paper flag sporting a Maltese cross (I had no references for proper Prussian flags!). This was in the days before Super Glue so I stuck the flagstaff to the figure using Bostick with the result that the flags were continually coming adrift.

This updated version has a flagstaff that is firmly attached with green stuff and super glue. It’s a bit over sized (but that was a common feature of 60s and 70s wargame armies) and will be receiving a Revo flag once the figure has been varnished.
Posted by Stryker at 08:49
Labels: Conversions, Prussian

Looking good! I was daydreaming the other weekend about an 1815ish Prussian army for myself too.

I will shoot any man I see with Bostik in him.

Looking good, another unit almost ready to march to the sound of the guns, with the dragoons you will have a nice allied force to take on the French.

I was given a box of 12 Hinchcliffe Prussian fusiliers as an Xmas present ca 1974, lovely idea from my auntie, but they towered over my Airfix Naps, ended up swapping them for a Led Zep album!

Dave - sounds like a good swop, lead for lead!

Showing a Hinton Hunt conversion convention too. Having to add flagstaffs meant that we made them long and took them down to the base for extra strength!
Roy

I have recently found, to my surprise, that marching officers are good for converting to colour bearers. The sword comes off remarkably easily, leaving a firm base for the colour in the right hand, while in many cases, the left hand can be coaxed away from the officer's, er, leg and brought up to support the pole. Bet everyone else has known this for years...